This show had tons of great science news and an excellent discussion with Aaron Wolf, doctoral researcher on neanderthal genomes and specifically how neanderthal and modern human genomes mixed (i.e. they reproduced) in ancient times. To begin, Aaron walks us through what we know about neanderthals and our modern misconceptions of them, and how they came about. From there, he discusses how the neanderthal genome was mapped, and why we think that most living humans have about 2% neanderthal DNA — and what that DNA is for. 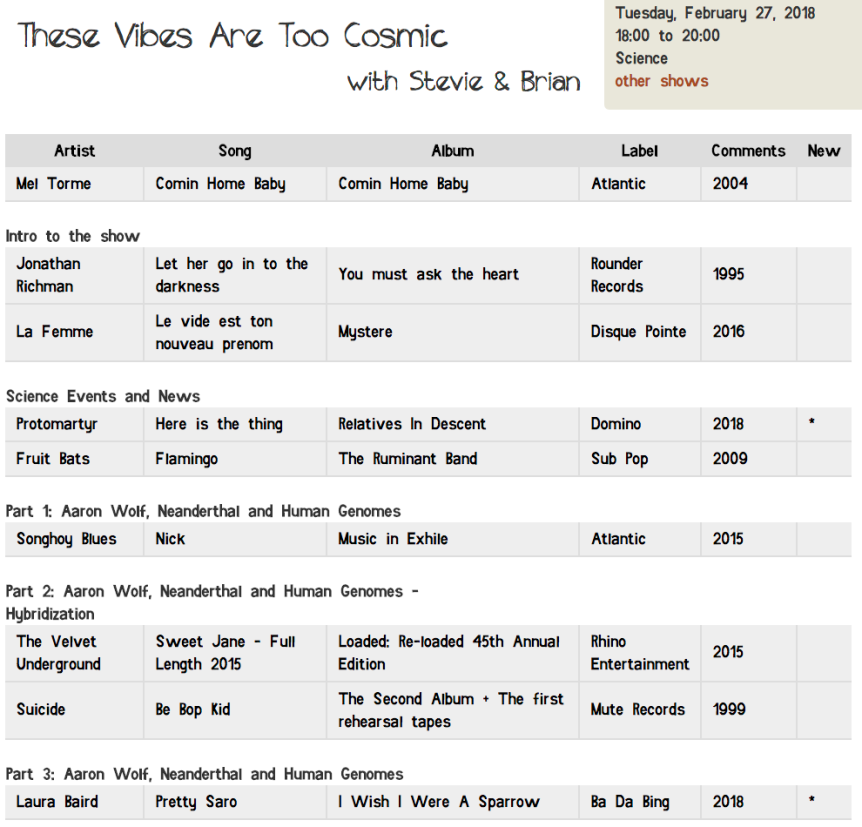 In this installment of TheseVibes, Krupa Jani, MD/PhD researcher in biochemistry, joined us in the studio to share her research in the lab and in the health policy arena. In the first part of the interview, Krupa summed up the American Health Care Act that was recently passed through the House and is currently being considered in the Senate. In parts 2 and 3 we discuss her research in epigenetics and how this is related to cancer.

Epigenetics is the study of gene expression. Every cell in your body contains the same DNA sequence, however which genes are turned on (and thus transcribed in to proteins — or “expressed”) and which are turned off will be different between different types of cells. e.g. your blood cells expresses different genes than your skin cells. In this interview Krupa dives in to what’s happening at the molecular level in this process of gene expression, and how this can go haywire to produce runaway cell replication, which would lead to cancer.

In a past show, Stevie interviewed Professor Bridgett vonHoldt on epigenetics and canine evolution. See the show link for the streaming link and more information. 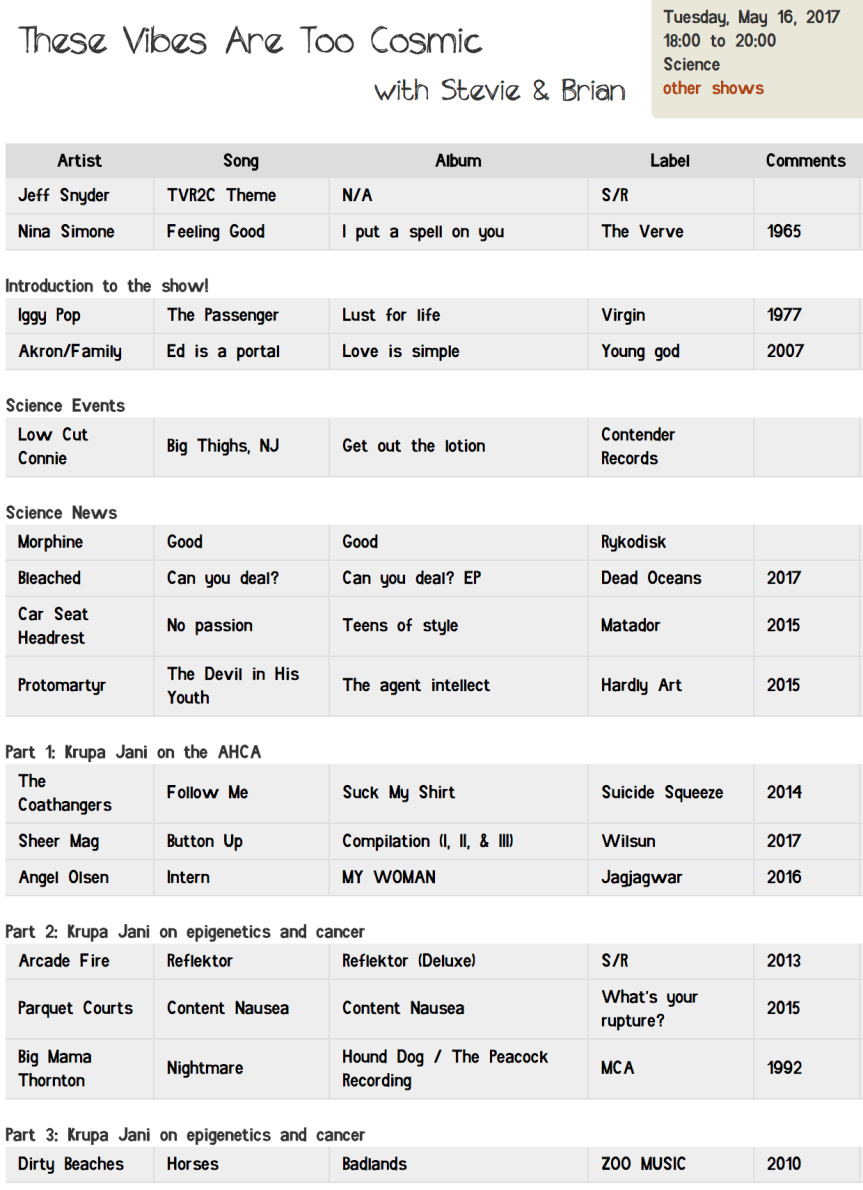 Image of a Yellowstone wolf from the Grizzly Wolf and Discovery Center.

In this installment of These Vibes we covered much ground. Our long form interview (one hour in to the recording) was with molecular ecologist and population biologist Bridgett vonHoldt, assistant professor in Ecology and Evolutionary Biology at Princeton University. Professor vonHoldt’s research centers around using the concept of epigenetics to understand evolutionary change. Epigenetics, as Professor vonHoldt explains, is the study of changes in an organism that come about due to gene expression rather than the genes themselves. Specifically, she researches the epigenetics of canids — these are canines like our beloved dogs and the Yellowstone wolf — and the evolutionary biology of the domestication of dogs.

In the last half hour, Ingrid Ockert tells us about Science in Wonder Land: The scientific fairy tales of Victorian Britain, by Melanie Keene.

In this installment of These Vibes, we welcomed Joseph Amon, visiting lecturer at the Woodrow Wilson School here at Princeton and Vice President for neglected tropical diseases at Helen Keller International, on human rights, the rights to health and education and their interdependence, and neglected tropical diseases. Later in the interview he describes his path, which takes us in to a discussion on the different approaches to addressing human rights deficiencies.

Science at the ISS:

Our bodies are made up of hundreds of different types of cells, each with their own specific task. They react to all sorts of internal and internal stimuli as they go about their business. Sometimes they’re instructed to move left/right, reproduce, kill themselves, etc. If this all goes haywire (think, cancer), and oh man are there so many ways it could, it can profoundly affect our lives, or end them.

In this interview I discuss cellular decision making and biomedical engineering with Anthony Berger, PhD student at the University of Wisconsin, Madison. Tony’s work focuses on how cells respond to the structural properties of their environment – i.e. whether the tissue around them is stiff, stretchy, soft, etc. Specifically, Tony studies how tissue stiffness and fiber architecture affects the development of vasculature (blood veins) within the tissue.  To accomplish this, he designs materials that can flex to allow for changes in the rigidity of a material without changing the density of that material (a very important point in the design).

All of my designs have been based around natural materials — I generally take some sort of form of collagen (gelatin in most cases) and chemically alter it to be less flexible.  We then embedd nodules of vascular cells within the tissue and observe how the cells invade into the material and develop a system of vessels.

I liken it to an office building with people working in it.  The building is the tissue and the people are the cells doing all the work.  Drugs and chemical growth factors/hormones are like emails to the people telling them to do specific things.  Changes in different physical aspects of the tissue would be like changing certain aspects of the building — if the floors were made out of trampolines, work efficiency would probably be much different than if they were concrete.  The point is the cells are generally what do everything in your body and a lot of focus is put on them, but the physical environment, often overlooked as something that is just there, has the potential to influence a cell’s behavior.

As an example, Tony guides us through how this relates to breast cancer. Note: the stiff lump a woman may feel in her breast isn’t actually the cancer, rather an area of stiff tissue that creates a preferred environment for breast cancer to take root. Scientists aren’t sure exactly why, hence research. Take a listen!

Malaria is a colossal global problem. In Africa, a child a minute perishes due to the parasite. It’s easy not to be aware of this in the US, where malaria hasn’t been a problem for many years – but 3.4 billion people (half the world’s population) lives in areas at risk of the disease.

In this episode of These Vibes Are Too Cosmic I speak with Gloria Tavera, MD/PhD student at Case Western Reserve University in Cleveland, Ohio. We discuss the general mechanics of our immune systems and malaria’s effect on it. We get in to why malaria is so difficult to treat and why so many children die from the parasite. Gloria explains the new malaria vaccine – both why it’s exciting and how it is far from a full solution (or even a full malaria vaccine), but rather an important step along the road to eradication.

In the last portion of the show we discuss another deeply important topic, and a great passion of Gloria’s: equal access to medicines worldwide. Gloria is president of the board of directors for UAEM (Universities Allied for Essential Medicines), an organization that uses a muti-tiered approach to leveling the access to affordable medications across the world, and particularly in developing countries. Gloria uses the example of insulin. In Sub-Saharan Africa people commonly die of diabetes due to the fact that insulin is rare and, when available, unaffordable. The system is stacked against them.

So, listen up, learn about our world, and get fired up!

Some extra info on malaria immunity (from Gloria Tavera):

The figures above (found here) show how an antibody, along with a set of molecules called complement, can bind a malaria parasite and keep it from invading a human red blood cell, which keeps it from surviving and reproducing.

The second figure above on that page shows how the set of molecules, called complement, bind to antibodies and make the antibodies even more effective at killing the malaria parasite and keeping it from entering human red blood cells.
More information on the fight for access to medicines (from Gloria Tavera):
UAEM creates a report card that grades universities on their access to medicines policies. We do this every other year (this one’s from 2015, then next one will be released in 2017).

Here’s a short video we made that explains what is wrong with the current reseach and development system and how we propose to fix it.

If you’re interested in going even deeper, read the recent LA Times piece from Economist Mariana Mazzucato, on problems and solutions regarding our current, global biomedical research and development system.

Playlist for the show: