Featured image: The Vaalputs nuclear waste site in South Africa, guarded (for the present) with fences and signposts. Can this strategy ward off the next 10,000 years of civilization? (Courtesy Mail & Guardian)

This week features Jacob Schwartz, a PhD candidate in plasma physics here at Princeton, who brings us a deep concern: what should we do with our nuclear waste? Fission plants produce radioactive byproducts over time, and these concoctions will be dangerous to life for millennia. At the WIPP facility in New Mexico, scientists are testing many methods for safe storage of radioactive materials. Even more intriguingly, reports from WIPP contemplate strategies for warding off future civilizations, communicating across the centuries that an area is unhealthy to inhabit. How can we send messages on the timescales of the pyramids? How far do duty or ethics push us to confine our nuclear waste?

Elsewhere in the show, we cover the geology of northern Iraq and the dangers it poses to a dam near Mosul. Plus, look forward to a scientific 2017 with epigenetics, artificial intelligence and biometric identification. Throughout you can enjoy lots of jazz, blues, and music from Western Africa. 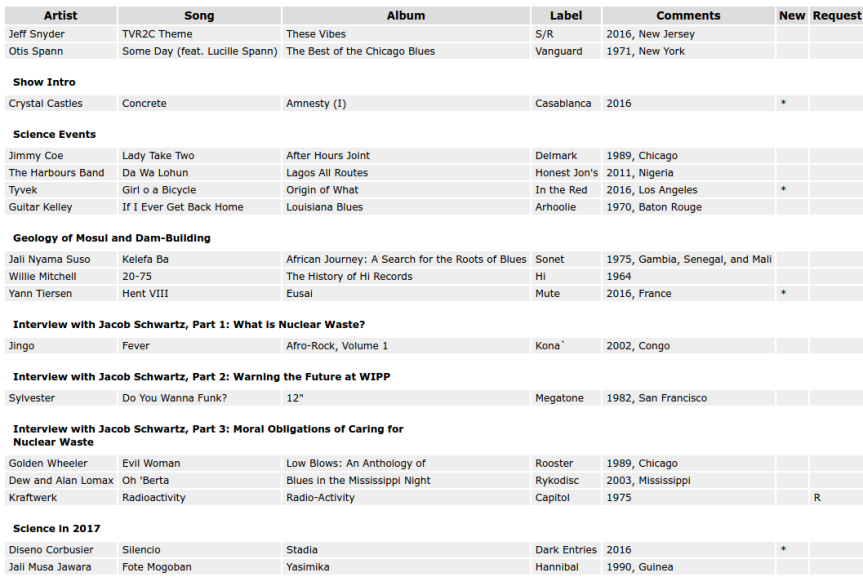