Featured Image: The sky, as viewed from New Mexico or Chile by Sloan Digital Sky Survey. Pointed out is a quasar at extreme redshift, almost 15 billion light years away.

Dr. Chuck Steidel, Caltech astrophysicist and former WPRB DJ, was kind enough to come into the studio during a visit to Princeton several weeks ago. He and his son Nicky (a current DJ at the station) were putting together a clash-of-generations show, so we snagged him for a talk about galaxy formation, extreme redshift, and next-generation telescopes. After that, Stevie brings us a highlight of recent LIGO results: more black-hole mergers have been detected!

Chuck is interested in the ancient universe. Back in those days, soon after the Big Bang, the first clouds of gas were clumping together to form rocks and stars. It was a chaotic time: stars were igniting at alarming rates, and UV radiation would have caused serious sunburns for creatures like us. But understanding this period can tell us how early stars formed–which helps us learn how stars progressed to form complicated elements like carbon and oxygen.

Of course, looking at something so old is not easy: it’s so far away that not much light reaches us, and the light that does has actually warped. Since the universe is expanding, the light gets redder and redder as it travels. If our telescopes on Earth can see enough light to detect these ancient star clusters, it can use how “red” the light gets as a measure of how far away the galaxy is. And this is a great tool: if a galaxy’s light is “redshifted” enough, Chuck knows it’s an old enough galaxy that it still has stars forming quickly.

Of course, when the light gets redder it gets harder to see. The signal starts to blend in with light emitted from our atmosphere. So, the best plan is to put giant telescopes up in space: they need to be large to collect lots of light, but also far above the Earth to avoid atmospheric defects. Keep in mind, sending telescopes to space costs money and takes time for organizations like NASA to coordinate. As they wait for these projects to develop, astrophysicists use ground telescopes to get initial observations of distant galaxies for hints about the better data to come.

One example of a next-generation telescope, steps beyond Hubble in many ways, is the upcoming James Webb Space Telescope. Not only will it have much finer resolution in the infrared for seeing distant galaxies, it’s fitted with a sensitive spectrometer to measure the precise colors of these objects. And Chuck is especially excited about that, because it will allow him to learn what elements are being churned up in these early galaxies. For now, the team takes measurements on two ground telescopes: Keck in Hawaii and Palomar in San Diego.

In the end, Chuck and I agree that science done just to satisfy human curiosity is a worthwhile pursuit. It may not lead to a better app or cure cancer, but most humans wonder about the universe outside our planet. Science for science’s sake might lead to technology we use elsewhere, but advancement is not the main point-and that’s OK. We close out with Chuck’s recollections of summers spent in the WPRB basement, where he hosted shows every day and often visited City Gardens in Trenton to interview alternative bands passing through.

After the interview, Stevie brings us more exciting news concerning our detection of gravity waves. You’ve heard in the news about LIGO’s first discovery, where they heard two black holes merge together from a billion light years away. The team has spent decades building and

perfecting a massive laser observatory, one that measures tiny shifts in laser light to detect small movements in the structure of space. Only massive gravitational events (like collisions between black holes and neutron stars) can cause movements this big. And it’s getting better, because LIGO just announced a second detection of gravitational waves that they found in December. With this development, it appears even more likely that we can use gravity-wave observations to tell us about the most massive things in our universe. So stay tuned for more revolutionary science from the scientists at LIGO!

As always, the playlist is either below or at WPRB.com. 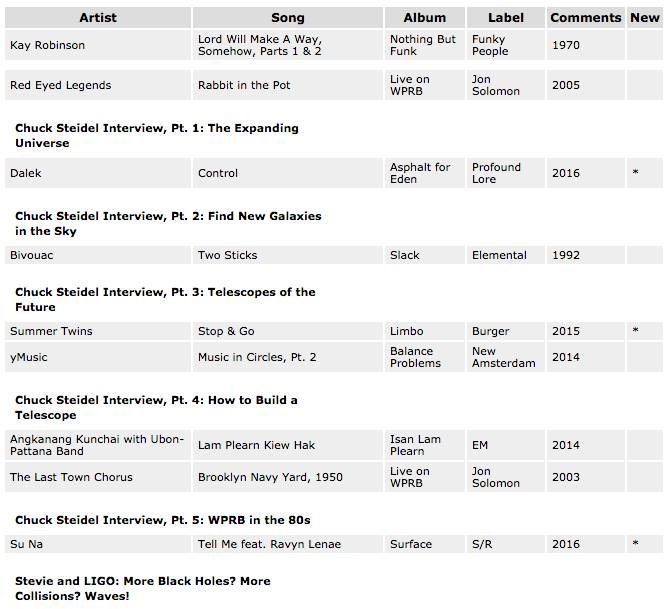