Our show this week welcomed Alfred Bendixen, Professor of English at Princeton University, who spoke with us about science fiction and the philosophy behind it. The discussion hit on many of our past shows, and gets into questions on cultural evolution and epistemology. Then, we close with Ingrid Ockert, returning to the show with another book review. She covers Groovy Science, a series of essays about the connections between 1960s scientists and hippies.

Alfred focuses his literary studies on genres that sit on the border between scholarly and popular. Detective novels, horror stories, science fiction–academia usually ignores these categories, even though they reflect aspects of society worth studying. Science fiction,

Alfred says, is written at the intersection of three ways we seek knowledge about the world: science, religion, and storytelling. Since the genre can dive into all three methods, it gives a unique perspective on our aspirations and fears about the future.

As an example of how sci-fi can inform us about our culture, Alfred brings up The Hunger Games. This enormously-popular series describes a dystopian world with a sadistic government of unaware aristocrats. Its heroine, Katniss, is named after a plant–in contrast to the broken bureaucracy that governs humans in the books, she turns to nature for stability and comfort. The story leaves plenty of room for interpretation, and can be championed by right- and left-wingers alike. The Hunger Games complex and unsettling speculation about our civilization’s future is what makes it successful, both on bestseller lists and for Alfred’s examination. As he says: “the greatest works of literature provide multiple lenses.”

As a genre, though, Alfred prefers the term “speculative fiction” to sci-fi. The writing is interesting because it wonders about our future, mixing probable developments in technology with fantasy. “Think of every science fiction story as a thought experiment,” puts Alfred, as if authors are considering the consequences of particular decisions our society makes now. The best of these stories are introspective, giving plenty of room to ponder. Alfred wonders about the hero of The Martian, sitting alone on Mars, who spends hours and hours growing potatoes but not much time contemplating his lonely existence. It’s “hard” science fiction, firmly seated in facts and real science, but it fails at examining our place in the universe and the consequences of sending humans to other worlds.

I asked Alfred about the Juno orbiter, mentioned in our last show, which is slated to commit suicide into Jupiter to avoid spreading life to Europa and other moons. These questions about space travel are hugely prevalent in science fiction, of course, but the way they’ve been approached has changed over time. Many books assume that exploring the universe is a triumph of mankind over nature. We explore other planets, learn about the vastness of space, and experience the fragility of life in alien environments–but we never worry about polluting the Solar System or contaminating other worlds with unwanted life. As science fiction has developed, it has begun to take on more complicated pictures of morality in science. Modern works might ask: what do we stand to gain by going to space, and what do we stand to lose?

Finally, we ended the interview with an ongoing project of Alfred’s: studying “sources of terror” in American literature. There might be universal human responses to fear, but what if we examine cultural differences in our responses instead? For example, British stories feature castles owned by aristocrats, and the protagonist’s goal is to find her proper place in the world. In American stories, though, we don’t have castles: the thing to fear (and to conquer) is the expanse of nature itself, the Wild West of the American continent. And when our stories conclude, we don’t find a place for ourselves, we create one.

The way we process fear in stories changes over time, too: look at robots as an example. Early literature was terrified by androids and mechanization, represented as inhuman villains in Terminator or I, Robot. But as technology has become central to our everyday lives, we have a more ambiguous relationship with robots in literature, with some benevolent and some evil. As our culture’s opinions develop gray areas and nuance, so do our stories.

After the interview, Ingrid Ockert came on air to give a summary on a book about the history of science. This week, it was Groovy Science, a collection that examines the relationship between science and counter culture during the 60s-70s.  Our stereotype of scientists after WWII was one of a bored academic in a lab, writing notes in a white labcoat. But this stodgy picture fails to incorporate the real social role of scientists in the following decades. As hippies and scientists interacted, new research became prevalent: finding better materials for surfboards, brewing better craft beer, investigating the effects of psychedelics in a lab… Groovy scientists left the shelter of academia to work on such projects, and the role that science plays in our lives has changed as a result.

Thanks to both of our wonderful guests this week!

As always, the playlist is below or on WPRB.com. 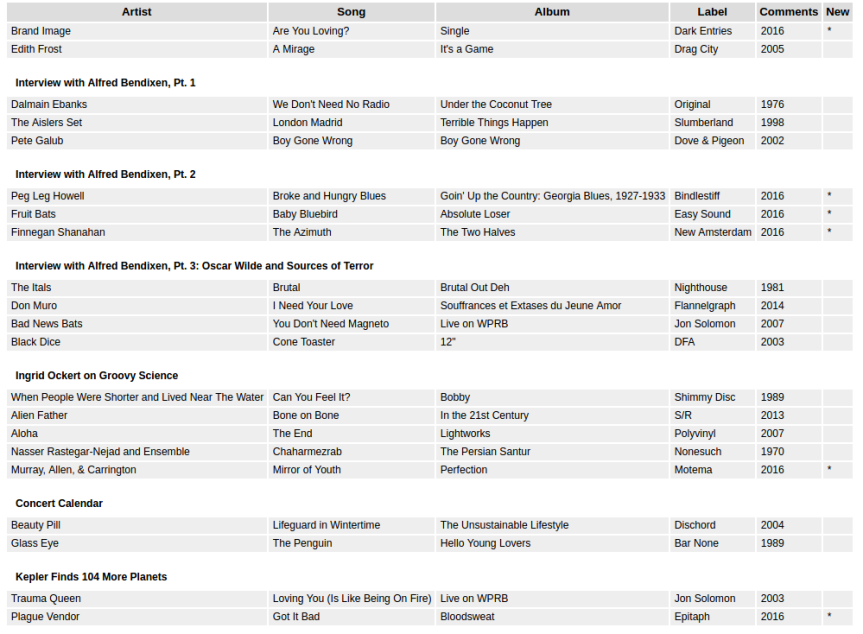