Featured image of Pluto, taken by New Horizons during its flyby of the dwarf planet. Courtesy NASA, which has a spectacular gallery of other images too.

This week on These Vibes Are Too Cosmic, we interview Aida Behmard, a post-baccalaureate scholar at Princeton, whose research involves finding exoplanets and postulating about the types of extremophile alien life that might live there.

Aida has been digging through a trove of data from the HATNet project, a series of ground-based telescopes pointed up at swaths of the sky to try and find stars with planets orbiting around them. She searches through the history of telescope measurements, trying to find the moment when a planet orbits right in front of a star. When the star’s brightness decreases incrementally, the researchers can tell that a planet has blocked some starlight and thus can learn about the eclipsing planet. And it works–so far, the project has discovered 56 exoplanets around distant stars!

Motivated by the origins of life, Aida hopes to learn about the atmospheres of these new exoplanets and thus narrow down what kind of life might live there. These extremophile organisms, maybe used to harsh atmospheres and even radiation, could exist in many different forms surprisingly different from the kind of life we’re used to on Earth. To understand the possibilities, Aida communicates with biologists about what living structures might exist so far away.

We talked a bit about the wild astrophysical spirals that can exist around the centers of galaxies, active galactic nuclei. These insane structures have materials spinning inward into massive black holes, which produces violent amounts of radiation all over the spectrum–from radio waves to X-rays and beyond. Since these signals are so widespread (even including visible light, like the NASA image shown), it’s easy to see light from galactic nuclei all over the sky, through all kinds of telescopes that we use to observe outer space.

Finally, Aida is the director of a new outreach project at Princeton, Open Labs. This program organizes science talks aimed at different grade levels, and it brings in classes from local schools to hear about all kinds of research going on at Princeton. Check it out!

After Aida left, we went on to talk about the new observations of Pluto by NASA’s New Horizons mission. The new knowledge we have about 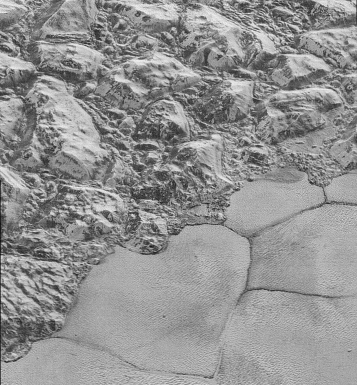 Pluto’s geography is stunning, and will keep planetary geophysicists busy for years to come. The surface of the dwarf planet is mostly made of 40 Kelvin (supercold!) nitrogen and water, which are both solids at this temperature. Their consistency is different, though: the nitrogen ice is soft, like quicksand, and the water is rock-hard. Thus, Pluto has frozen features like Sputnik Planum, shown to the right. It’s a massive nitrogen sea, with glaciers and mountains of rock-ice floating around it and inside it. Still, there’s tons more to learn about Pluto, since the low-bandwidth connection we have with New Horizons means it will be months more before we harvest all its wonderful images.

To end the show, Stevie talked all about SIGSALY, a system of cryptography used in World War II that kept messages secret with vinyl records. These massive stations would be set up at important military bases around the world, and then two matching records (one message, one decoder) had to be played in unison for a highly-secret message to be understood. This technique, which involved briefcases of decoder records and 55 tons of high-tech processing equipment per station, paved the way for modern cryptographic techniques and data processing (that allows us to communicate in war and for you to use your cell phone).  Learn all about it here!